Are you part of a fantasy football league or a fantasy baseball league? Are you tired of passing a dinky trophy around to your league winner? I have found a solution to your problem.

You can wear the belt to league events or drafts, it is much easier to carry around than a trophy. In fact you will WANT to carry this belt around. 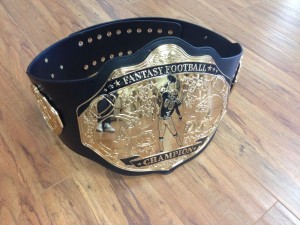 Check Prices on Amazon
In my research of fantasy championship belts, one company kept popping up, UndisputedBelts. You can get a fantasy football or fantasy baseball belt.

You can choose either black or white for the base color of the belt. The color of the plates on the belt can also be customized, either silver plated or gold plated. (Baseball belts can only be gold plated)

Unfortunately, you can not order a customized belt with the league name or unique plates. However there are two blank plates at the end of the belt that you can bring to a local engraver to put a league name or list of winners.

Not being customizable also keeps the price down. Other sites that offer fully customizable belts start around $300 and can take up to 14 weeks to produce.

The belt is 55 inches long and the buckles are made out of metal to ensure a long life of the belt. Some other cheaper belts will use plastic components and will wear out very quickly.

Undisputed Belts sell belts on eBay and Amazon with a 100% rating on both sites. Below I have posted some of UndisputedBelts reviews and the feedback they have received.

“The belt was way more than I was expecting. The quality, feel and weight of the is superb. For the price and quality the belt is a great buy. The highest recommendation!” 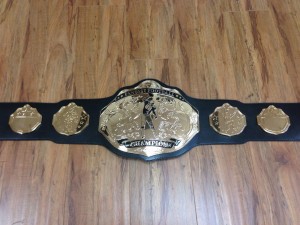 “Exactly as it looked and described. Big, heavy and just awesome”

“Awesome item! My fantasy league is very happy. Item is better than expected.”

Belts are available to buy on Amazon at the below link:

Have a championship prize worth fighting for, and something that everyone will want to carry around!