As the summer days get longer and hotter, more people are spending as much time as possible in their swimming pools. While a great way to cool off with family and friends, it also takes careful maintenance to keep all aspects of one’s pool in top condition.

However, one solution to this problem is using sodium bicarbonate. But before you go looking for it in the pool supply section of your local store, you can simply make a trip to the grocery store and find it on the shelves in front of you. To many people’s surprise, baking soda is the very same chemical, with the added bonus of being a very pure grade as well as a finer grind.

Benefits of Sodium Bicarbonate for pools:

Along with raising the water’s alkalinity while hardly impacting pH levels, sodium bicarbonate has other benefits for the swimming pool as well. For example, since it is not a potentially harmful chemical when bought in baking soda form, it’s relatively safe to use around children and pets who might be frequent swimmers in the pool.

It’s also a very cost-effective way to keep the pool water clear, allowing pool owners to stay on top of their water’s acidity levels. And finally, it is very easy to find in grocery stores or online whenever it’s needed, which makes pool maintenance even more convenient. 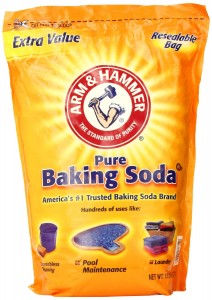 Need to add a lot of sodium bicarbonate?
It is often easier to buy in bulk rather than individual one-pound boxes from the store.

How to Use Sodium Bicarbonate in a Pool:
For those who are new pool owners and wonder how to use sodium bicarbonate in the pool’s water, the good news is the process is extremely easy and effective. Along with the baking soda, you’ll need an eyedropper and a pH test strip.

Begin by removing some of the pool’s water with the eyedropper, then placing the water sample on the pH test strip. The strip will then change color to indicate the pH level of the water, letting you know what to do next.

How Much Baking Soda Should Be Used?
After testing the water’s pH level, it’s time to turn on the pool’s filter system to allow the baking soda to mix with the pool water.

And of course, there should be no swimming in the pool until all the baking soda has dissolved.

By using this inexpensive but effective form of sodium bicarbonate, your pool’s water can once again be clear and have much lower levels of acidity.

This will not only keep the water from stinging everyone’s eyes but also make swimming and splashing around on a hot summer day even more refreshing. And as we all know, there is nothing better than taking a flying leap off the diving board into a big pool of cool, clear water.